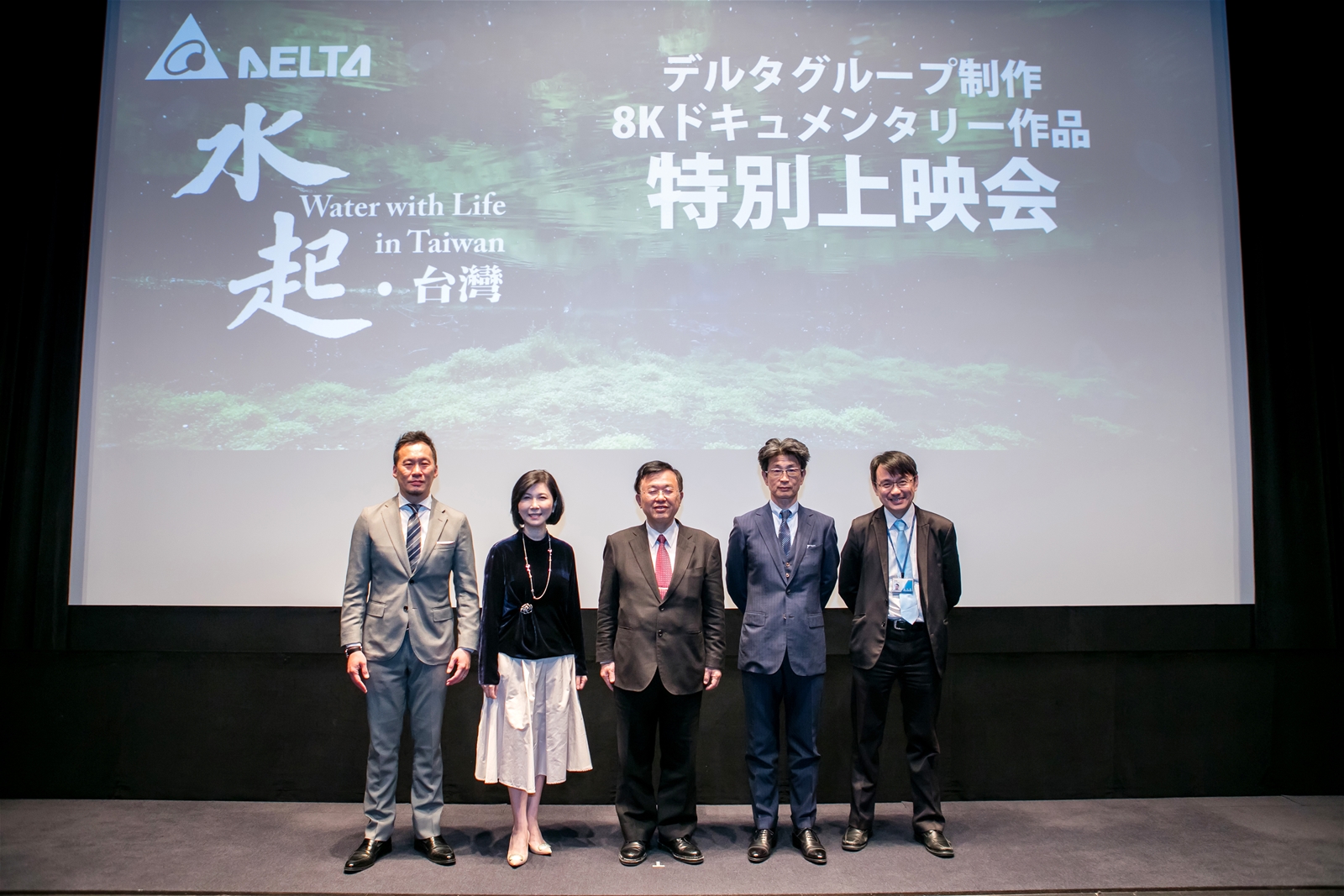 After the premiere of Delta's 8K environmental documentary of "Water with Life in Taiwan" on NHK BS 8K satellite channel in Japan, and large screen public show at the National Museum of Natural Science (NMNS) in Taichung at the end of March, Delta held a special show of the documentary at Akihabara 8K Projection Experience Theatre in Japan in the evening of April 16. Various features of Taiwan's waterscape were presented at great length on the 300-inch large screen with self-developed 8K UHD projection technology. Shan-Shan Guo, Vice Chairman of Delta Foundation, CEO Wim Chang, CH Ko, General Manager of DEJ and Kengo Ka, Senior Director of DSBU and Kazuhiro Sato, Chief Producer of the documentary of "Water with Life in Taiwan" attended the special show event. The event also attracted nearly 60 guests from media and all walks of life.

General Manager CH Ko said in his opening speech, it took nearly two years for DEJ, NHK Enterprise and Delta Foundation to complete the environmental documentary of "Water with Life in Taiwan", which reflects Delta's emphasis on corporate social responsibility and environmental sustainability with practical actions. Water is an extremely valuable resource for Taiwan. "Water with Life in Taiwan" not only presents natural beautiful sceneries of various parts of Taiwan with 8K ultrahigh resolution, but also faithfully records environmental issues related to water resources.

Vice Chairman Shan-Shan Guo expressed that Delta appreciates the shooting team of NHK Enterprises very much. To faithfully present various features of Taiwan's waterscape, the four seasons were taken as observation points. Along the flow of the black tide, sceneries were surveyed from Kenting in the south to Hokkaido in the north, and finally, appropriate shooting points were selected. It took a year and nine months from scenery survey to completion of the shooting. More than 50 members of the team from both NHK Enterprises and Delta used equipment like 8K cameras, high-speed cameras, 8K air shooting drones and underwater cameras, etc. so that the public can watch environmental phenomena like the disappearing lichen and moss on Yilan County's Cilanshan Mountain, the ecological restoration of the Formosan landlocked salmon's habitat in the Cijiawan River in Taichung and the bleaching of corals of Kenting in Pingtung County, etc. 8K detailed images are used to convey the impacts of global warming and human activities on water and related environment.

Chief Producer Kazuhiro Sato said, as far as we know, this is the world's first 8K, long-storytelling documentary. Different from other 8K materials, this documentary not only shows 8K visual effects, but also contains a lot of contents. It not only shows breathtaking colors as well as beautiful and bright scenes; the team focuses more on the real presentation. Delta's decision to produce this 8K documentary is respectable and we are very proud to have participated in the production.