On the 10th Anniversary of Typhoon Morakot, Delta Raises Climate Awareness with 8K Philanthropic Screening and Commits to the Construction of the Affiliated Kindergarten of Minchuan Primary School in Namasia

Delta Electronics Foundation that emphasizes on issues with energy and climate organized a philanthropic screening of a series of 8K environmental documentaries using Delta's 8K laser projectors of 36,000 lumens, the brightest in the world, at the National Science and Technology Museum in Kaohsiung, in hopes of raising the public's climate awareness with awe-inspiring images. The films presented included Behold Typhoon Morakot, a reproduction of the aerial documentary of the Morakot Disaster filmed by the late Director Po-Lin Chi, The Calling of Namaxia, a documentary on the reconstruction of Minchuan Primary School with the students and teachers of the school in the cast, and Water with Life in Taiwan, the very first 8K environmental documentary in Taiwan well-received at home and abroad. Ever since the catastrophic damages brought by Typhoon Morakot to Taiwan in 2009, Delta had assisted the reconstruction of Minchuan Primary School in Namasia destroyed by the typhoon and successfully erected a "diamond-rated" green building with functions of emergency shelter and energy efficiency and has shared its cases multiple times at the COP events of the United Nations. Furthermore, to meet the demand of the local community, Delta has committed to the construction of the Affiliated Kindergarten of Minchuan Primary School to support the education of preschool children.

Mr. Bruce Cheng, Founder of Delta Group and Chairman of Delta Electronics Foundation, stated in the pre-screening remark that 90% of the impacts of climate change are related to water, such as extreme precipitation, warm winter and droughts, coral bleaching, and elevated sea levels. In light of the public's concerns on the 10th anniversary of Typhoon Morakot, the post-typhoon aerial images captured by the late Director Po-Lin Chi and the issues with water in Taiwan exposed in Water with Life in Taiwan were faithfully presented via the ultrahigh resolution of 8K projection. It was not merely a memory of the suffering we have been through with the typhoon, but a reminder of the devastating power of climate change, so that the general public and the decision makers alike may take seriously the challenges brought by global warming and the imbalance of water use and water resources.

Ms. Shan-Shan Kuo, Vice Chairperson of Delta Electronics Foundation, stated that what we reconstructed in Namasia was more than a primary school; it is an emergency shelter as well as a sustainable green building that keeps children "away from disaster instead of their home" and allows them to learn in a safe, energy-efficient green building. We are pleased to see a growing number of school children after the inauguration of Minchuan Primary School. The Foundation is planning to further sponsor the construction of the Affiliated Kindergarten of Minchuan Primary School in Namasia, so that the children going to the kindergarten nearby the riverbed can enjoy a safer learning environment, while the generations to come will thrive in a healthy, energy-efficient green building.

Sponsored by Delta Electronics Foundation and designed by architect Ying Chao Kuo, Minchuan Primary School in Namasia has achieved zero energy waste since 2015, which is 93% more energy-efficient compared to the average of the elementary schools in Taiwan. This year, Delta's distributed energy system integrating functions of energy generation, storage, and management is also introduced to elevate its utilization of renewable energy and the tribe's resilience in the face of disasters. Minchuan Primary School has been serving as emergency shelter during the flood periods, accommodating over 5,000 individuals. International studies showed that Minchuan Primary School's disaster prevention rating reaches 81.5%, which is 20% higher than the other campuses in Taiwan, making it an international-level green building model as a disaster resilient campus. In 2014, Delta Electronics Foundation shared its relevant green building adaptation cases on the official side event at COP20. During the Paris Summit of COP21 and at the center of global attention in 2015, Delta re-presented the library of Minchuan Primary School in Namasia at Grand Palais, Paris, France. With its shape of a Thorn Apple, a significant theater of image projection with a height of 7 meters tall was created to showcase Taiwan's achievements in green building on the international stage of carbon reduction, which was immensely applauded by the participants.

Delta's 8K Philanthropic Screening for the 10th Anniversary of Typhoon Morakot is to screen 8K environmental documentaries, Behold Typhoon Morakot, The Calling of Namaxia, and Water with Life in Taiwan, at 12:00 and 16:00 every day from August 7 to August 11, so as to raise the public's climate awareness with 730-inch 8K projected images. In addition, to allow more citizens to appreciate the fine details of 8K projection and the difficulties of Taiwan in water resources, Water with Life in Taiwan will be screened at the National Museum of Marine Science and Technology in Keelung at 15:00 on a daily basis, August 16-18.

The charity film screening 8K “Water with Life” on Oct. 10th and 11th at the Sun Moon Lake 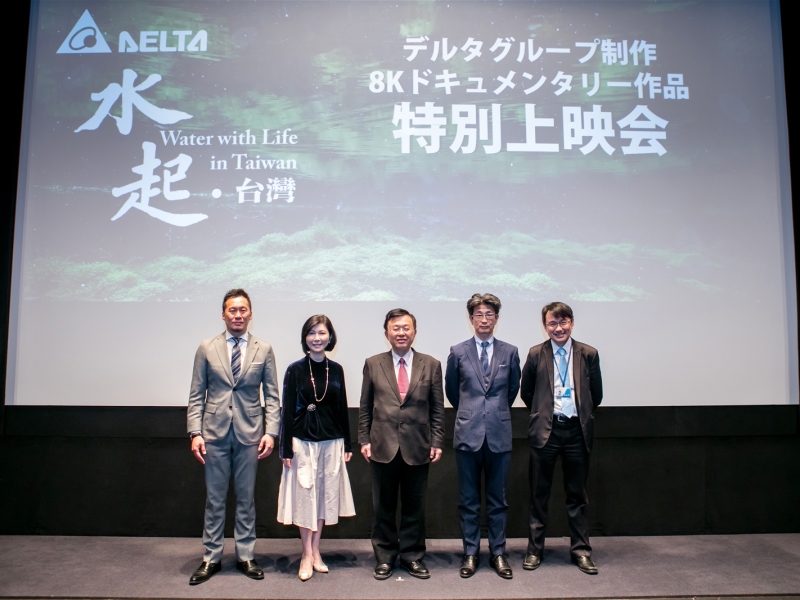